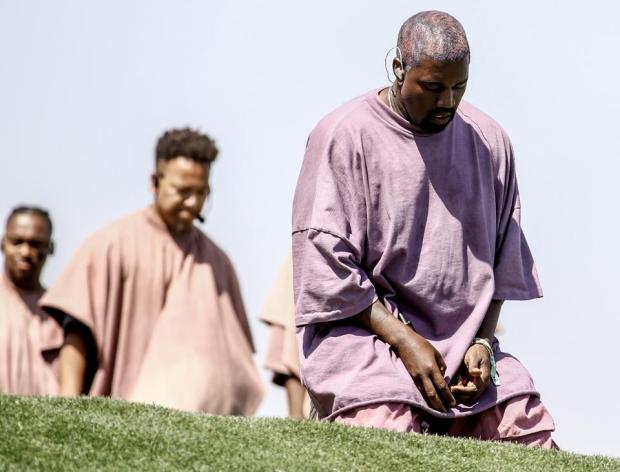 Over the weekend, Kanye West released his eleventh solo studio album Jesus Is King. Following the release of his last album Ye and the collaborative effort Kids See Ghost as part of the GOOD Music Wyoming package back in 2018, West announced the follow-up project Yahndi. Self-described as a “full Kanye album,” Yahndi built anticipation with comparisons to legacy albums like Watch The Throne, 808s and Heartbreaks and My Beautiful Dark Twisted Fantasy. It featured a handful of artists including Lauryn Hill, Nicki Minaj, Rihanna, Tekashi69, Ty Dolla $ign, Migos, posthumous XXXtentacion and many others. After a few initial delays, Kanye previewed the album with The Fader on September 27th and announced his guest appearance on Saturday Night Live coinciding with the albums release the following weekend. Excited fans stayed up that night anticipating the albums release. However, the album went unreleased and Kanye moved to Uganda to put last-minute touches on the project. It wasn’t long before Kanye announced on Twitter that the album was unfinished and that he would announce it’s new release further delaying the album indefinitely.

During the first week of 2019, West introduced the “Sunday Service” where the rapper would perform gospel iterations of past and future hits alongside the gospel choir The Samples, Tony Williams and Anton Clemons every Sunday. The Sunday Services drew a large storm of media coverage with celebrity guests such as A$AP Rocky, Brad Pitt and Katy Perry attending the services throughout the year. On August 29th, Kim Kardashian West tweeted the Jesus Is King tracklist with a September 27th release but after a few listening parties and another delay, the project went silent. Fast forward a month, West returns to Twitter announcing the albums actual October 20th release. Along with the announcement comes reports that Kanye West is a born again Christian and that he quit rap because it’s “the devil’s music” …. what is going on here!? This all goes without speaking on controversial moments like West’s support of Trump throughout the last couple of years. Let’s jump into the 11-track album and let the music speak for itself!

The Cognitive Dissonance of Kanye West

Jesus Is King opens up with the Sunday Service choir crooning about the importance of having faith in the Lord on “Every Hour” before diving deep into the following track “Selah,” in which we get our first glimpse of a reborn Kanye West. “God is King, we the soldiers / Ultrabeam out of order / When I get to Heaven’s gates / I ain’t gotta peak over,” he raps. We also find out what happened to his scrapped album. “Everybody wanted Yahndi / Then Jesus Christ did the laundry / They say the week start on Monday but the strong start on Sunday,” he continues over a triumphant power production. The next track “Follow God,” one of my favorite and “most hip-hop”, is a continuation of The Life of Pablo’s “Father Stretch My Hands Pt. 2” where Kanye shares the ins and outs of his experience with Christianity. By the fourth song and album’s lead single “Church On Sunday,” I’ve made the decision that this isn’t a gospel album, yet the artistic expression of one of the most influential rapper’s journey through life. Kanye West continues to explore themes related to spirituality and the new world on the next track “On God,” which features production reminiscent to those on 808s & Heartbreaks. Before revisiting the vibey Sunday Service performed track “Water,” Kanye teams up with Ty Dolla $ign and Ant Clemons on a feel good track and one of my favorite tracks titled “Everything We Need”. After praising the lord over a soulful sample of Reverend Cleveland with “God Is,” Kanye West fully reclaims his faith on “Hands On”. Before appropriately closing the record with “Jesus Is Lord,” Kanye teams up with Clipse on “Use This Gospel” before Kenny G steals the show with an impressive performance.

Firstly, stop calling this a gospel album! Although Kanye finds himself exploring themes related to spirituality, this project is more of an artistic expression of where this artist is spiritually. It’s still very hip hop with elements and moments that incorporate the gospel genre. After rolling out eras of music that left us questioning this rapper’s faith and leading the rich and lavish lifestyle, it’s hard to take Ye seriously and further supports my claims in The Cognitive Dissonance of Kanye West. Personally, “Church On Sunday” is also one of the most contradictory tracks finding the self-serving rapper and husband to Kim Kardashian warning us to, “Hold the selfies / Put the ‘Gram away / get your family / Y’all hold hands and prayer.” Whether this is just a publicity stunt as stated by the cast of The Everyday Struggle or an actual representation of where Kanye is, it is refreshing to hear the rapper that called himself Yeezus considering a higher power. With comparisons to his legacy albums, Jesus Is King is disappointing. In my opinion, the production throughout the album is very Kanye-esq without actually reaching the full potential that fusing the genres of hip-hop and gospel elements could be, like with “Jesus Walks”. Lyrically, this album doesn’t pack the punch that legacy projects like College Dropout and My Beautiful Dark Twisted Fantasy did. As Kanye suggests in a controversial interview with Real 92.3’s Big Boy, the Apple Store doesn’t sell iPhone 4s anymore but unlike Apple’s products, Kanye’s music isn’t getting better. I’m very excited to see how the music and this new era of Kanye West grows on me, the fans and the critics. Initially, I wasn’t impressed by Yeezus. However, over time the project grew on me, becoming one of my favorites of his collection. However, none of that matters if Kanye is moving forward without these projects. I will do a follow-up review after sitting with this album for a few weeks. Kanye West’s follow-up album Jesus Is Born is scheduled for release this Christmas but you never know with Kanye! What are your initial thoughts on this project? Be sure to sound off in the comment box below!