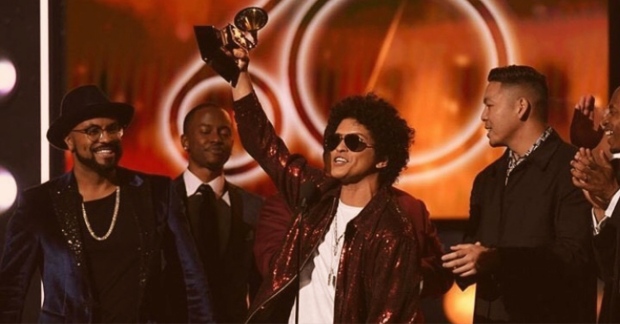 Magic was definitely in the air for Bruno Mars at last night’s Grammy Awards. The 24K Magic artist swept the award show winning six Grammy Awards including the night’s prestigious Record of the Year, Song of the Year and Album of the Year for “24K Magic,” “That’s What I Like,” and 24K Magic. He also took home the award for Best R&B Album and Best R&B Performance for “That’s What I Like”. “Later on in life I found that those songs I was singing [from childhood performances] were written either by Babyface, Jimmy Jam Terry Lewis or Teddy Riley and with those songs I remember seeing people dancing, toasting with each other celebrating together … all I wanted to do with this album was that. These songs were written with nothing but joy, with one reason and one reason only, that’s love. That’s all I wanted to bring with this album,” he reflected as he closed the night with his expectance speech for Album of the Year.

Other winners included Kendrick Lamar who went home with five awards including Best Rap Album, Best Rap/Sung Performance, Best Rap Song, Best Rap Performance and Best Music Video for DAMN., “Loyalty” featuring Rihanna and “Humble”. Other winners included Ed Sheeran who went home with the Grammys for Best Pop Performance and Best Pop Album for “Shape Of You” and Divide, Alessia Cara for Best New Artist, The Weeknd for Best Urban Contemporary Album with Starboy and Childish Gambino for Best Traditional R&B Performance with “Redbone”. Amongst all the wins, of course, came losses or “snubs”. Viewers questioned the academy after heavy-hitters like SZA, nominated for 5 awards, and Jay Z who lead with 8 nominations both went home empty-handed. Fans were also angered when pop singers Lady Gaga, Kesha, and Lorde went home empty handed too. With this year’s nominations meeting critical approval, did the Recording Academy get the winners right too? Sound off in the comments below!

Song of the Year
“That’s What I Like” – Bruno Mars

Best R&B Performance
“That’s What I Like” – Bruno Mars

Best R&B Song
“That’s What I Like” – Bruno Mars