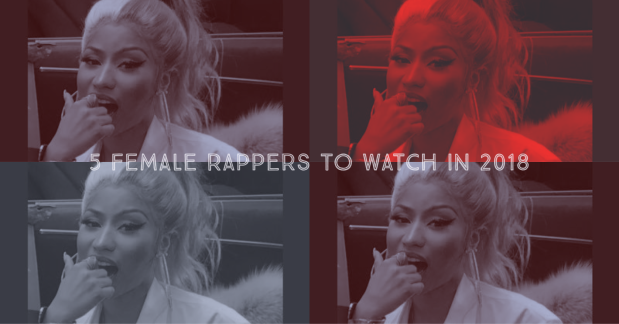 Last year was a big year for females, especially in hip-hop! From Nicki Minaj and Remy Ma’s infamous beef to the rise of Cardi B, you couldn’t avoid the hype of the femcee in 2017. One of the year’s biggest moments included Remy Ma’s Summer Jam performance. During her set, the Harlem rapper brought a handful of female MCs on the stage to perform Queen Latifah’s “UNITY”. Bringing female rappers together amongst her infamous feud with Nicki Minaj made a huge impact on the hip-hop community. The performance reminded me of the days where there were more than one or two female rappers in hip-hop. Another notable moment includes the release of Rhapsody’s critically acclaimed Laila’s Wisdom which earned the North Carolina rapper a Grammy nomination for Rap Album of the Year. 2017 also found Bronx rapper Cardi B! The 25-year old’s debut single “Bodak Yellow (Money Moves)” made Cardi the first female rapper since Lauryn Hill to top the Billboard Hot 100 with a solo single.  With other notable releases and moments in between, 2017 marked the first time a female rapper, other than Nicki Minaj, dominated the hip-hop scene for almost ten years! Interestingly, we ended the year with the bubbling Migos single “Motorsport”. The track, which features both Cardi B and Nicki Minaj, finds the rappers throwing subliminal shots at each other despite denying a feud. Now, I know there’s enough room for more than one female rapper! It’s actually refreshing to see females thrive in a male-dominated industry. However, any hip-hop head loves a feud and we’re looking forward to seeing who will take the crown in 2018! Below are 5 female rappers to look out for in 2018!

Lil Kim is the undeniable Queen Bee. The femcee paved the way for many female emcees including Nicki Minaj who muted the legend back in 2010. Since then, we haven’t heard much from the Brooklyn native. However in 2017, Kim marked her return to music with “Took Us A Break.  Although the buzz single didn’t make much of an impact, her collaboration with Remy Ma was pure gold. I think if Lil Kim sticks to her roots, she can find a spot in the battle field in 2018. With Lil Kim’s fifth studio album due for release later this year, we’re excited to see if she can make her return to the spotlight!

After being released from prison, Remy Ma hit the scene swinging. After topping the Billboard charts with the Fat Joe-assisted single “All The Way Up”, the rapper created a buzz with “Shether (Remix)”. The Nicki Minaj-diss found Remy contending for the title of queen of rap. After winning the BET award for female rapper of the year Remy went on to release the Lil Kim assisted single “Wake Me Up”. “Wake Me Up” delivered a hard-hitting, street sound that hip-hop has been missing for a long time. With her album 7 Summer, 6 Winters due for release in 2018, we’re excited to see the impact Remy makes.

Nobody had a worse year in 2017 than Iggy Azalea! The femcee made her return with her sophomore abum Digital Distortion‘s lead single “Team”. Although the single set Iggy up for success, everything went downhill from there. Between several setbacks, leaks and two very unsuccessful singles (ie. “Mo Bounce” and “Switch”) the singer couldn’t get over the sophomore hump and ended up scrapping the album in it’s entirety. Little is known about the direction of Surviving The Summer but the album will surely make or break the rappers career. The albums lead single “Savior” ft. Quavo is due for release February 1st. Judging by sounds coming from the rapper’s Instagram, Iggy’s packing heat! Will Iggy Azalea survive 2018? Only time will tell!

Cardi B had a remarkable 2017! Within one year Cardi went from reality TV star to rap superstar with her record breaking single “Bodak Yellow (Money Moves)”. Since then the Bronx rapper has become a household name with a slew of hits including Migos’ “Motorsport,” G-Eazy’s “No Limit” and the latest, Bruno Mars’ “Finesse (Remix)”. With her follow-up single,”Bardier Cardi” ft. 21 Savage, sitting pretty at #14 on the Billboard Hot 100, Cardi has built a sturdy platform for the release of her debut album. “I have a lot of pressure on me,” the 25-year-old MC tweeted. “I have songs stashed up. I just don’t think they qualified for my album. Sometimes I think its ready sometimes I think it’s not so I’m going to take my time till it’s right.” While there aren’t many details on the release of Bardi’s debut album, we do know one thing, Cardi B will continue to make money moves in 2018!

When it comes to female rappers, Nicki Minaj is the reigning queen of rap. However, 2017 met Nicki with loads of controversy. From Remy Ma’s viscous diss “Shether” to break-ups with Meek Mill and most recently Nas, Nicki couldn’t keep her name out of the headlines. Amongst it all, the three singles she did release, “No Frauds,” “Changed It,” and “Regret In Your Tears” failed to make a major impact of their own.  With the success of females in hip-hop at an all time high, fans and critics are waiting for the queen of rap to make her move. “Sonically, I know what the album’s about to sound like,” she explained in a recent interview with T Magazine. “I know what this album is gonna mean to my fans. This album is everything in my life coming full circle…Now, I can tell you guys what happened for the last two years of my life. I know who I am. I am getting Nicki Minaj figured out with this album and I’m loving her,” she continued. We’re definitely looking forward to Nicki Minaj in 2018!