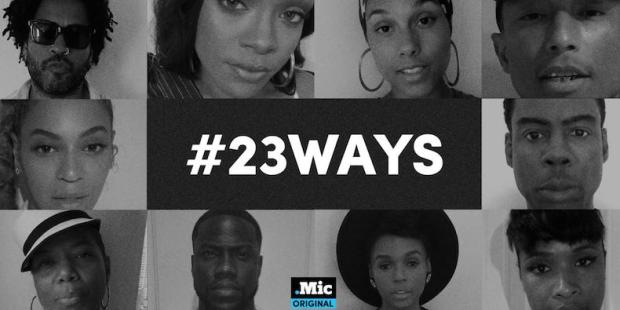 The #BlackLivesMatter campaign is in full force as  as black Americans continue to be publicly executed by police with shocking frequency. Along with Jay Z, Victoria Monet and Ariana Grande comes a handful of artists who are teaming up for an interesting video titled ’23 Ways You Can Be Killed If You Are Black In America‘. In the powerful video, put together by news site MIC, some of today’s biggest voices including Pharrell, Rihanna, Adam Levine, Pink and many others, spotlight reasons why black Americans became victims of police brutality within the last 16-months. Alicia Keys kicks off the video saying “Failing to signal a lane change,” citing the Sandra Bland case. Beyoncé then spotlights the recent Philando Castile death, stating, “Riding in your girlfriend’s car with a child in the back.” Other reasons include: selling CDs, walking away from police, walking toward police, making eye contact and laughing. Janelle Monae, A$AP Rocky, Chance The Rapper, Common, Queen Latifah, Talib Kweli, Swizz Beatz, Lenny Kravitz, Bono and Jennifer Hudson are the rest of the musicians involved. Taraji P. Henson, Chris Rock and Kevin Hart also take part in the video. This conversation is davstating, yet neccesary. I’m glad more and more celebrities are stepping up to use their platform to shine light on these matters. Check out ’23 Ways You Can Be Killed If You Are Black In America’  below!