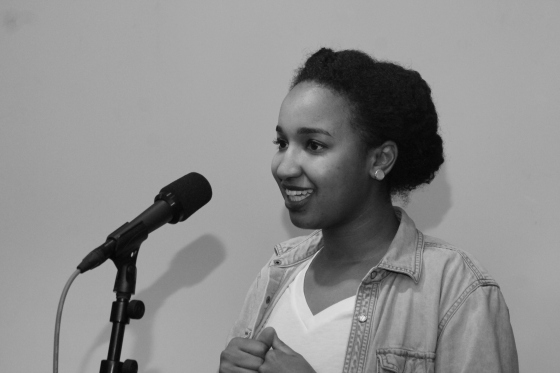 After bringing Stand Up and Chill to the PVD last year, Isaura Santos present the second installment of Stand Up and Chill: A Night of Stand Up Comedy, held on Saturday, February 20 at Trade Pop Up in Providence, Rhode Island. Due to the economy, there was an admission fee of $10 and people still showed up. Trade was packed, with a little under 100 people in attendance. There were light refreshments, beer, wine, and our signature ~positive vibes~ environment. This time around, the lineup featured Kody Fraser, Smaxxie, Irvin De La Rosa, Tyler Pavlik (who VOLUNTEERED to perform. Right then and there, on the spot) and Evan Little and every single performer killed it.

Growing up, I always knew I wanted to be a comedian but never said it out loud out of fear of rejection, disapproval, and judgement. Once I entered college, I then realized that one should never give a shit about what others say and decided to pursue my dream.

I spent the last four years at the University of Rhode Island, where I studied Political Science and Communication Studies and minored in Leadership Studies. Unfortunately, “Comedy” isn’t a major. During my first two years of college, I dedicated many hours to studying, crying in the dorm bathroom, and reading syllabi like it was the Holy Bible. I needed a break from lectures and homework and thankfully a comedy contest was being held on campus. I entered and won my first comedy competition. The prize was opening for Michael Ian Black, which was the experience of a lifetime. From there, I entered several stand up competitions and showcases but put comedy aside during my senior year of college. Fear of rejection, disapproval, and judgement is at an all time high during your last year of college and I became a pessimistic, anxious person. Many sad adults were telling me how to live my life yet they were not asking me what I wanted to do with my life. After graduating college this past May, I decided to take a break from all things “professional development” and focus on my love of comedy. I spent the summer re-watching my favorite sitcoms, listening to stand-up routines, and writing my own material.

Fast forward to October and I’m sitting in a Colombian restaurant with my good friend Oreo. Oreo wanted to know when I was going to perform stand up again. I shrugged my shoulders as I took a bite of my empanada and she says, “Isa, just do it. Rent a space, publicize the event and just do it. You got this.” Several weeks later, Stand Up and Chill: A Night of Stand Up Comedy is born. I wanted to provide a night of free entertainment and drinks on a day where millions of dollars are spent on material items. The goal was to have the audience and performers be diverse in background and experiences. The event was held at Trade Pop Up in the Fox Point neighborhood of Providence, Rhode Island. Stand up and Chill was literally a full house, with an audience going out the door. The show was a success and I couldn’t have been any prouder of the comedians; Kody Fraser, Smaxxie, Irvin De La Rosa, Tyler Pavlik and Evan Little. The goal of having a diverse audience was met and I am hashtag blessed and thankful for all those who attended.

“Check out these up and coming comedians share some of their stories, observations, and thoughts about living the every day life.” The official video for Stand Up and Chill is now available on YouTube! Viewer discretion is advised. Watch Kody Fraser, Smaxxie, Irvin De La Rosa, Tyler Pavlik and Evan Little and myself. The show was filmed and edited byMore Than Entertainment. Thank you to the performers, the amazing audience for such a positive energy, Sabrina and Jason of Trade Pop Up, the film crew who filmed and edited the show and Liana Weeks for photography.