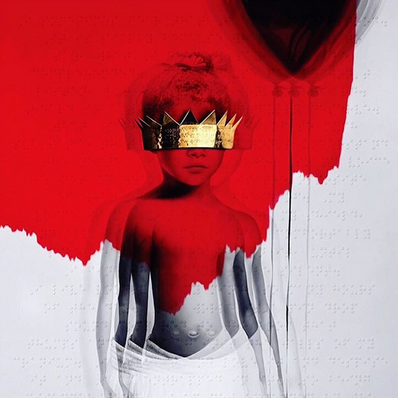 After more than a year of anticipation, three buzz singles and much controversy, Rihanna finally released her eighth studio album ANTI. The album preceded the three singles “FourFiveSeconds”, “Bitch Better Have My Money” and “American Oxygen” which left fans wondering where the pop superstar would be going with her artistry. Fans and critics became even more confused when RiRi took a complete U-turn releasing the official lead single “Work” featuring Drake. Long and behold, Rihanna takes her artistry to a new level with an exploration album that gushes that bad-girl attitude we’ve all learned to love with a track-listing free of teeny-bopper hits or club bangers. The album opens up on a strong note with “Consideration”, an edgy track featuring SZA, which sets the pace of the album. Before taking us on a journey through her new image and sound, Rihanna smokes fans up with an interlude titled “James Joint”. The next track “Kiss It Better”, talked up to be the album’s gem, is a heart-felt love story featuring Rihanna’s strong vocals aside the rock-felt genre. After winding and grinding on “Work” featuring Drake, RiRi takes a turn into with a dark yet thrilling track titled “Desperado” and a Travis $cott inspired track titled “Woo”. After that, our bad girl dives into her feelings with the DJ Mustard produced “Needed Me”, the smooth and sex-tensional “Yeah, I Said It” and one one of my favorites, a trippy and psychedelic cover of Tame Impala’s “New Person, Same Old Mistakes”. After visiting the album’s dark corner also known as “Never Ending”, Rihanna showcases her vocals over a heartfelt, 50’s doo-wop titled “Love On The Brain”. After taking her vocals to a new heights on the leaked track “Higher”, the singer appropriately closes the album with a smooth and emotional ballad titled “Close To You”. While most fans were looking for another handful of hits, Rihanna has provided her fans with a project that takes her artistry and sound to new, respectable heights. At the early stages of ANTI’s production, Rihanna explained that she wanted to make music that lasts for a lifetime and I believe that’s exactly what she did with this rock-inspired, exploration, bad gal-esq album which proves that Rihanna is not only a heavy-hitter but a talented trendsetting artist. In comparison to Madonna, ANTI is Rihanna’s Ray Of Light in sound yet much, much edgier. While the album has already proved to be a success with a platinum certification and a sold-out world tour, I think Rihanna has much more up her sleeves when it comes to this era! I’m looking forward to how everything rolls out! What do you think?