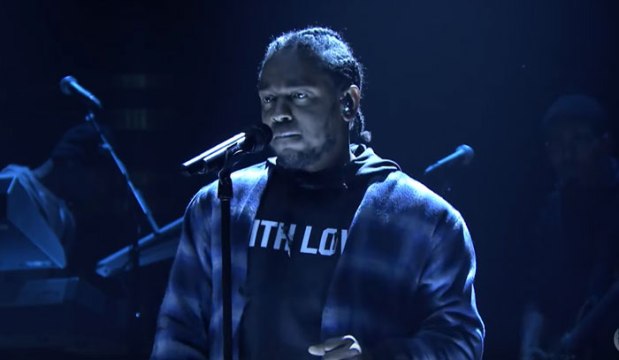 After releasing one of the best albums of 2015 with To Pimp A Butterfly, Kendrick Lamar kicks off the new year with some brand new content! Last night K Dot stopped by ‘The Tonight Show With Jimmy Fallon’ as a special guest performer. Wearing a flannel shirt and hoodie inscribed “With Love,” the Compton rapper debuted the jazzy, brand new song called “Untitled II.” In addition to the performance, K Dot sat down with Fallon to discuss the forthcoming Grammy Awards. Fallon compared the rapper to Michael Jackson who received 12 nominations for his thriller in comparison to him with 11 for To Pimp A Butterfly. I wouldn’t want to go past that. I can’t fathom being as great as Michael without putting out the work, so 11 is perfect.” You can catch Kendrick Lamar at the 58th Annual Grammy Awards on Monday, February 15, 2016 on CBS. Check out Kendrick Lamar’s performance and interview below!