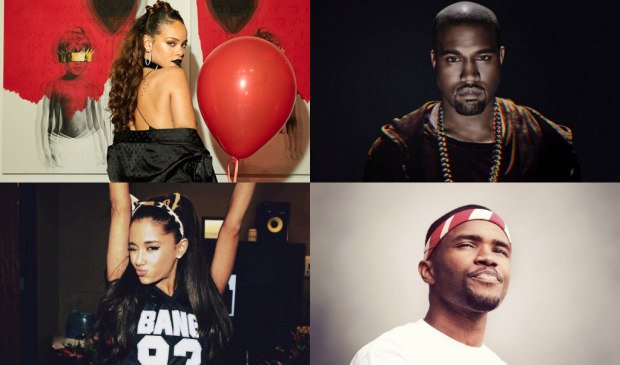 Happy New Year Know-It-Alls! After sweeping your social media feeds with our 2015 end-of-the-year lists (The Best Of BennettKnows In 2015, What Were The Year’s Best Albums?, The Best Music Videos of 2015 & What Were The Most Successful Singles of 2015), we’re kicking off the new year with a brand new list! This time around we’re asking the readers what their most anticipated project of the new year! 2016 is a promising year with highly-anticipated projects from Rihanna, Drake, Kanye West and many others. Below is a list of music’s forthcoming albums and everything we know about them. After reading the list vote for your most anticipated project of 2016 and drop a comment below!

Although it may seem like Lady Gaga fell off the face of the earth in 2015, the pop singer brought her talents to new areas in entertainment with a #1 Jazz album and a leading role on FOX’s American Horror Story. However, after flopping back in 2013 with ARTPOP, fans await a successful return to pop music in 2016. According to Gaga Daily, the pop diva is expected to release her fifth studio album, LG5, in the second or third quarter of this year!

Charlie Puth met success in 2015 with his collaboration with Wiz Khalifa on the smash single “See You Again”. After that, the singer released two successful singles; “Marvin Gaye” and “Nothing But Trouble”. While “Marvin Gaye” featuring Meghan Trainor topped the pop charts, “Nothing But Trouble” featuring Lil Wayne topped the R&B/Hip-Hop charts showcasing the vocal abilities and varying sounds that this young artist can offer. With that being said, I’m looking forward to how Puth will be marketed in 2016! His debut Nine Track Mind  is due for release January 29th, 2016.

Speaking of the devil! Wiz Khalifa capped 2015 with buzz tracks such as “Burn Slow” and “King Of Everything”. In 2016, the rapper is scheduled to follow the hype with his sixth studio album Rolling Papers 2: The Weed Album. The album features collaborations with Rae Sremmurd, Snoop Dogg and The Weeknd. Based of his most recent releases, we should expect nothing but hard-hitting, marijuana-induced bangers! Before fans get to listen to the anticipated project, Wiz Khalifa plans to release a brand new mixtape titled The Khalifa Project.

Another pop diva scheduled to release new music in 2016 is Ariana Grande! In 2015, the pop diva released the albums lead single “Focus”. Although we love the single, Ari describes the album with a much different sound. It has been reported that Moonlight features collaborations with Chris Brown, Nicki Minaj and Charlie Puth. In 2014, Ariana Grande killed it with My Everything! I’m really looking forward to the growth and maturity Grande will showcase on this next project. Moonlight is currently under development and is expected for release later this year!

Iggy Azalea is now one of the most hated acts in music. In 2014 the Australian femcee met success with her debut The New Classic. Although the album received positive reviews, Iggy fell short of her own success amongst the hip-hop community, music lovers and online haters in-between. In 2016, Iggy Azalea has a lot to prove with her follow-up Digital Distortion. Iggy confirmed that her new album is full produced by Los Angeles-based production team D.R.U.G.S., who worked on her acclaimed 2011 debut mixtape Ignorant Art, including viral hit “Pu$$y”. Do you think Iggy has what it takes to win over the critics? We’ll see how this plays out!

In 2015, R&B newcomer Tinashe released two singles off her sophomore album Joyride. While the lead single, “Player” featuring Chris Brown, topped the charts her collaboration with Young Thug on “Party Favors” was enough to keep her buzzing. In 2015, Tinashe hit the studio with some of the greatest producers: Diplo, DJ Mustard, Hit-Boy, Max Martin, Nic Nac, Travi$ Scott and Dev Hynes. With that type of production, I’m sure Joyride has a few bangers! Looking forward to what Tinashe has up her sleeves!

After more than a year of speculation and anticipation, ‘Odd Future’ singer Frank Ocean will return in 2016 with follow-up album Boys Don’t Cry. Back in 2012, Frank Ocean broke many records as he impacted culture with the powerful messages and smooth sounds of Channel Orange. Over the last couple of years Ocean has hit the studio with big names such as Pharrell, SebastiAn Danger Mouse, Drake, Childish Gambino and Tyler, the Creator! I’m looking forward to seeing the direction of this project! While Boys Don’t Cry is due for release late this year, the lead single “White Ferrari” is due for release very soon!

It has been three years since Rihanna released her seventh LP Unapologetic. Since then, fans have anticipated her eighth studio album ANTI. Although Rihanna capped off 2015 with three hit singles (“FourFiveSeconds”, “American Oxygen” and “Bitch Better Have My Money”) the announcement of a world tour and her seven-part, promotional, “ANTIdiaRy”  project with Samsung, ANTI still seems to be a mystery. However, with the ANTi world tour taking off in mid-February , fans should expect the album to roll out very soon!

Drake’s highly anticipated album Views From The 6 could be ringing in the new year! The highly anticipated project would follow a career-changing year for the Toronto rep, whose surprise albums If You’re Reading This It’s Too Late and What A Time To Be Alive, debuted at No. 1 on the Billboard 200. Following these projects, I believe Views From The Six will have a smooth sound like earlier projects such as Nothing Was The Same and Take Care. Thus far there has been reports claiming collaborations with big names such as Beyonce, Chance The Rapper, Fetty Wap, Kendrick Lamar, J Cole, Kanye West, Future and PARTYNEXTDOOR among many others! Views From The Six has a rumored January 6th release!

It’s been three years since Kanye West announced his new album Swish. Since then, fans have awaited any type of news/music as it relates to the highly anticipated project. In 2015, Yeezy released a handful of tracks including “Only One” featuring Paul Mccartney ,“All Day” featuring Allan Kingdom & Theophilus London, “Say You Will” and “When I See It”. “Swish still doesn’t have a release date. I still just keep working and trying to find the language that I wanted to say on my album. Just going in the lab every night! It’s soundin’ good, like a sonic painting. And it gets better and better every week,” he explained during a recent interview. Kanye kicked off the new year with a new track titled “Facts” but fans and critics were not happy with the surprise release. With so many releases and rumors circulating the web with SWISH, it’s unsure what to expect from Kanye West in 2016 … let’s just hope it’s what music lovers are looking for!