If you ask any music lover, regardless of age, genre of interest or place, they’ll all agree on one thing; 2015 was an amazing year in music. This year, I found myself overwhelmed with releases from new comers and established artists alike. On Thanksgiving weekend alone there were more than 10 musical releases from some of today’s hottest artists. Nonetheless, I never found my bored when listening to music -there was always something new to listen to. Whether I was listening to refreshing pop hits such as Demi Lovato’s Confident, turning up to the trap/hip-hop fusion of Future’s Dirty Sprite 2 or reminiscing on my long but not lost lover with Adele’s 25, there was always something new and relevant to listen to. One of the things I like the most about music is that you can listen to a song and all of the feelings attached to the song will return and boy, does 2015 have a blazing soundtrack. Being a fan of all genres of music -hip-hop, R&B, pop, trap and everything in between, I found it difficult to narrow my iTunes catalogue to just 10 albums. When I think of album of the year, I no longer consider just it’s mainstream success; units sold, singles on the Billboard HOT 100, etc. While that definitely matters, other things that are just as important include the overall development and production of the album, did the artist improve/reinvent their artistry, what ways did the project impact culture and finally, how did I incorporate these projects into my personal soundtrack? With that being said, below are the Top 10 albums of 2015!

This year Meghan Trainor made an impact on mainstream America with her self-written debut Title. The project spawned the Billboard Hot 100 singles “All About That Bass”, “Lips Are Movin” and my favorite track, “Like I’m Gonna Lose You” featuring John Legend. Although “All About That Bass” was a gimmicky track that may have gotten the best of us in the previous year, Title is a soulful piece that made me appreciate this pop singer much more! Not only does Trainor provide listeners with a unique sound that pop music hasn’t had in a while but her self-written lyrics and slick and keen attitude provide a few laughs that make the overall experience that much more worth it!

Earlier this year A$AP Rocky surprised fans when he suddenly released his sophomore album A.L.L.A (At Long Live A$AP). The project’s back story, following the death of producer A$AP Yams and tracklisting, which included a wide range of artists including Lil Wayne, Kanye West, Schoolboy Q, Future and many others was enough to put fans and critics over the edge. The album spawned the singles “Lorde Pretty Flacko 2”, “Everyday” and “L$D”. For an artist who wanted to prove that he was the true underground king, A.L.L.A was a wonderful shift [from his debut] which successfully blurred the lines between artistry and respectability, making A$AP Rocky one of the most relevant rappers in the game!

In 2015 Madonna returned to the scene with her most relevant project in over a decade. Although half the project leaked before it’s March 9th release, Madonna was able to make a comeback worth talking about. The project spawned the singles “Living For Love”, “Ghosttown” and “Bitch, I’m Madonna”. Rebel Heart consisted of a diverse group of producers including Diplo, Kanye West and Avicii providing sounds of trap, house and the reggae genre while featuring artists Nicki Minaj, Mike Tyson and Chance The Rapper. The overall project allowed the pop star to reinvent her image once again proving that Madonna is the true queen of pop music! 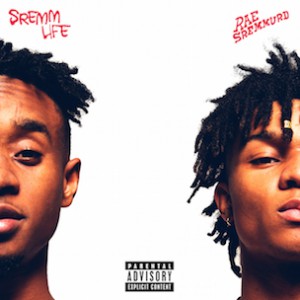 Rae Sremmurd added to this years most recent wave of trap/hip-hop fused music with their versatile style and overall influence. Sremm Life spawned five singles including “No Flex Zone”, “No Type”, “Throw Some Mo”, “This Could Be Us” and “Come Get Her”. The Mike Will Made-It executive produced piece is a turned-up record that had everyone partying in 2015. Along with Mike Will Made-It came collaborations with Big Sean, Nicki Minaj and Young Thug. There’s no denying the hype of the Sremm Life which made Rae Sremmurd one of the biggest debuts of this year!

Favorite Tracks: “Up Like Trump”, “This Could Be Us” & “Throw Some Mo” featuring Nicki Minaj & Young Thug

This year Skrillex and Diplo got together presenting their first collaborative piece which explored the popular and ever growing genre of trap and EDM music while plugging in some of today’s biggest stars. Jack Ü spawned the smash single “Where Are Ü Now” ft. Justin Bieber and the singles “To Ü” featuring AlunaGeorge and “Take Ü There” featuring Kiesza. I remember when the album dropped I listened to it for hours and to my surprise the project took a life of it’s own. Do you remember when you first heard the beat drop on “Where Are Ü Now”? There’s no denying the energy that Skrillex and Diplo provided and that’s why Jack Ü makes my list in 2015.

5. Drake – If You’re Reading This It’s Too Late

In 2015 Drake introduced a new era in his career with the release of surprise project If Your Reading This It’s Too Late. On the project Drizzy takes us through a 17-track journey exploring themes of success, star-power and reflection, all aspects of Drake’s new Nothing Was The Same follow-up era. The project, produced by big names like Boi-1da and PARTYNEXTDOOR, spawned the singles “Energy”, “10 Bands” and “Preach”. Although the project is categorized as a mixtape, the success and overall impact that it had on culture proves that Drake is one of the most relevant names in hip-hop!

After three years without music, Justin Bieber returned to the scene with his fourth studio album Purpose. Plugging in producers Skrillex and Diplo (as stated earlier in the list), Justin Bieber was able to shake off his bad-boy image and regain his spot as an artist. Thus far Purpose has spawned the hit singles “What Do You Mean”, “Sorry” and “Love Yourself”. Overall Purpose came at a perfect time showcasing both Justin Bieber’s personal growth as a superstar in the limelight and an undeniable talent that can cover all genres including pop, hip-hop, R&B, EDM and even soul.  Adjacent to the stripped-down, graffiti covered album art comes a stripped-down, well-developed Justin Bieber who regains his spot as one of the most talent artists on the planet!

With the release of Dark Sky Paradise, Big Sean proved that he’s not one of those artists that lose momentum after reaching a peak in the first few years of their careers. Plugging in a wide range of artists, Big Sean delivered one of the most developed projects of his career. Dark Sky Paradise spawned the five hits consisting of “I Don’t F*ck With U”, “Blessings”, “All Your Fault” “One Man Can Change The World” and “Play No Games”. Overall, Big Sean provided fans and critics with a confident, well-developed project that proves that he is growing as a rapper. Teaming up with a handful of producers Big Sean delivers R&B inspired hooks with complex, crisp and enjoyable pop-felt sounds. Keeping it consistent, the Detroit rapper delivers bars consisting of his witty and unique flow. The content of this album combined with Kanye’s production makes this album a success proving that Big Sean is here to stay!

2. The Weeknd – Beauty Behind The Madness

This year The Weeknd teamed up with the biggest producers to deliver one of his most mainstream projects to date. The album which explores the themes of love, sex, drugs and fame features 14 tracks that take us on a journey behind what The Weeknd calls his “inner-madness”. The album spawned a whopping seven hits including “Tell Your Friends”, “Often”, “The Hills”, “Earned It”, “Acquainted”, “In The Night” and the international smash “Can’t Feel My Face”. Beauty Behind the Madness is a wonderfully produced project that took The Weeknd’s career to the next level! Being a fan of the Weeknd since 2009, I noted the growth that Abel has had since he released his first mixtape House Of Balloons. While fans usually disconnect with their favorite artists upon their transition from underground to mainstream, fans praised Abel for staying true to himself while appealing to new audiences!

1. Kendrick Lamar – To Pimp A Butterfly

Kendrick Lamar delivered one of the most complex and culturally relevant projects in a long time.  To Pimp A Butterfly, meant to be listened to from front to back, tells Kendrick Lamar’s story of entering the music industry, realizing it’s truth and using his voice as a platform to enlighten the culture. The project spawned the singles “i”, “The Blacker The Berry”, “King Kunta” and “Alright”. Whether K Dot was exploring themes of self-acceptance, the music industry, social institutionalism or his spot as an emcee in hip-hop culture, he delivered truth with complex and hard-hitting bars. The beauty of this album is it’s relevance to 2015 and all of the social injustices that took place as well as Kendrick’s spot in the music industry (especially after his 2014 Grammys-snub) hence why he’s leading the forthcoming Grammys with 13 nominations. Overall, Kendrick Lamar found his voice with To Pimp A Butterfly proving that he is not just the voice of  this generation but a voice of the future.

1 Comment on 2015 Was An Amazing Year In Music: What Were The Year’s Top Albums? [Review]