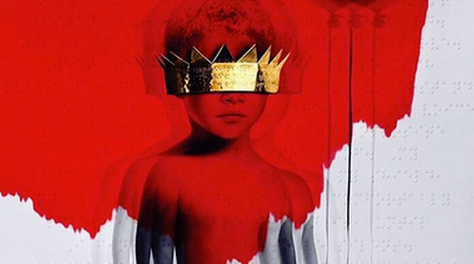 The wait is over! Rihanna has finally announced the title over her highly anticipated eighth studio album –Anti. During a private show last night, the bad girl announced the album title and released the project’s beautiful cover art. On the cover, designed by artist Roy Nachu, a young Rihanna can be seen wearing a crown over her eyes amongst dripping red paint. “I fell in love with it because I felt like there was another spirit, another layer to the art,” Rihanna told the crowd. “This is my favorite album cover I’ve ever done.” Thus far, Rihanna has released the lead singles “FourFiveSeconds”, “American Oxygen” and “Bitch Better Have My Money”. Interestingly on all the cover art, Rihanna has incorporated the leading theme with braille. “The whole idea behind the braille is people who have sight are sometimes the people who are blindest,” said Ri. While the album doesn’t have a release date, the pop singer explained that it is finally complete! What’s up #RihannaNavy!? Are you ready for the Anti-era? Check out Rihanna’s Anti lead singles below!

Rihanna – “Bitch Better Have My Money”