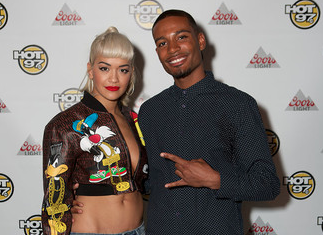 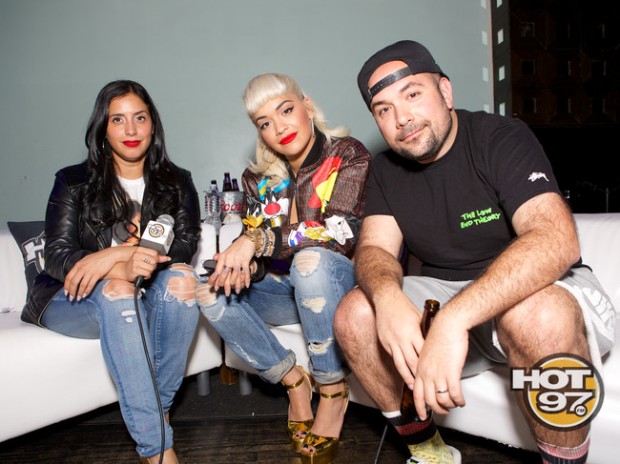 With her current single “Body On Me” featuring Chris Brown topping numerous charts, Rita Ora is ready to take the world by storm! At the peak of the production of her debut album, the UK songstress stopped by HOT 97 New York for an exclusive event called ‘Up Close With Rita Ora’. In an interview lead by Laura Stylez and Peter Rosenberg, Rita discussed the ins and outs of the highly anticipated project. Kicking off the interview discussing her current single “Body On Me”, Rita explained how she is a natural collaborator; working with artists that she respects based on their talent and not solely their work. She continued to discuss collaborations explaining that she’s not dating Wiz Khalifa, but working with him on a sensual track titled “Religion”. Although music is her first love, Rita has developed a name in fashion teaming up with Adidas for her ninth collaboration! Rocking a stylish Loony Tubes Moschino jacket and torn jeans, Ora explained that it’s ironic that she made it to New York for fashion week. Growing up listening to punk rock, Rita noted Gwen Stefani, Blondie, Runaway and Amy Winehouse as big influences on the forthcoming project. As of now, Rita Ora’s biggest achievement is performing at the prestigious Oscar Awards back in 2015. However, with the release of her official debut album, the sky is the limit! “With me it’s all about timing,” she explained upon releasing music in the United States. “I’m treating every record like it’s my last! It’s all about content and consistency,” she continued. I think it’s time! I’m looking forward toboth Rita’s future success and seeing this pretty young thing in the future! Rita’s first US album is scheduled for release in November! Check out footage from the event below!