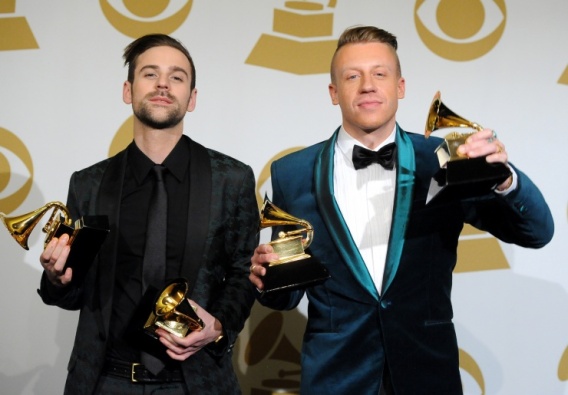 Last year when Macklemore & Ryan Lewis’ The Heist won the Grammy Award for Best Rap Album over Drake’s Nothing Was The Same, Kendrick Lamar’s good kid, m.A.A.D. City, Kanye’s Yeezus and Jay Z’s Holy Grail, all amazing rap albums, the world went mad! While the Seattle duet’s debut album was commercially successful many believed that the album in no way defined hip-hop or rap-culture. Upon the announcement of this year’s nominees in the same category, the world went mad, again! This time around, some of hip-hops biggest names voiced their opinions on the controversy. On J. Cole’s 2014 Forest Hills Drive track “Fire Squad”, he references the controversial topic rapping, “Same thing that my nigga Elvis did with Rock ‘n Roll/ Justin Timberlake, Eminem and then Macklemore. While silly niggas argue over who gone snatch the crown/ Look around my nigga, white people have snatched the crown. This year I’ll prolly go to the awards dappered down, watch Iggy win a Grammy as I try to crack a smile.” During a recent interview with Angie Martinez, Cole explains that the issue isn’t black vs. white but more about capitalism and the system driving issues in our society today. “I fast forward 20, 30 years from now, and I see hip-hop being completely white”, he explained comparing hip-hop to jazz music.

During an interview with Big Boy, YG addresses not being included in the Best Rap Album nominees, “I already knew I wasn’t gonna win a Grammy. I’m like, ‘They gon’ nominate me for sure.’ It was just, when I seen some of them albums on there, it was like, I really didn’t get it.” YG’s debut My Krazy Life was one of 2014’s best rap albums. It was unique, well put together and represented the people. “I feel like that’s a slap in the face, like, ‘You n*gga'”, he continued. Another rapper who feels very passionate about the topic is Harlem femcee Azalea Banks. Although the rapper continuously grabs headlines for her on-going beefs and overly opinionated statements, everything she said during an interview with Hot 97 was very true. According to Azaelia, the Grammys are sending out the wrong message, “When they give these Grammys out, all it says to white kids is, ‘You’re great. You’re amazing. You can do whatever you put your mind to.’ And it says to black kids, ‘You don’t have sh*t. You don’t own sh*t, not even the sh*t you created yourself”, she explained. However, Banks takes it further than the Grammys discussing capitalism and the system. “At the very f*ckin least, y’all owe me the right to my own identity. And not to exploit that sh*t. That’s all we’re holding onto, like hip-hop and rap. And Bill Cosby, and whatever the f*ck it is. You have Eric Garner and Mike Brown and now y’all talking about Bill Cosby. Y’all putting that on TV for the youth to f*ckin see! It’s all back to back to back and we really need to talk about this!”, she explained as tears rolled down her face.

After talking to numerous friends, I’ve noticed that we all have different opinions on the topic. While some feel that hip-hop/rap and other genres are diverse and people are focusing only on the race card others have strong feelings on the topic and believe that cooperate America is just smudging black culture until it’s gone. What does this mean? At a time where black culture is constantly being affected with unjustified murders and suspicious accusations is hip-hop/rap also being stripped away? While music is diverse upon many genres including pop, R&B, rock and hip-hop, it’s bothersome to see the same pattern occur so often. Should Iggy Azalea’s The New Classic be nominated for Best Rap Album? I believe so! But what if the Australian femcee grabs the Grammy award for Best Rap Album on February 8th? Time will only tell! Please, share your opinions and thoughts in the comment box below!