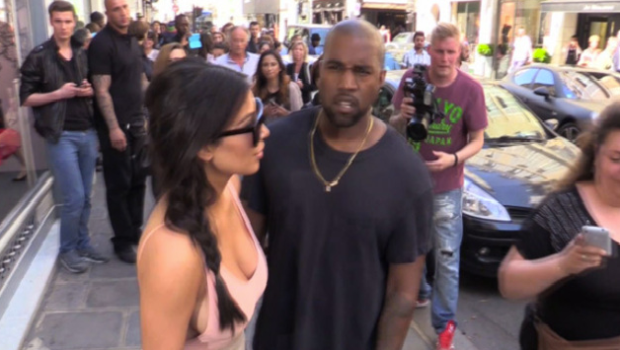 Yesterday, Kim Kardashian and Kanye West continue their wedding planning in the beautiful city of Paris. As the two finish up the planning for their May 24th ceremony, they were attacked by a pool of fans and paparazzi alike. While some fans squeeze in selfies with the power couple, papz ask the most random questions ever. Nonetheless, Kim handles the situation with grace like she always does and Kanye hold his temper, smiling and cooperating with the crowd. Before Kanye hops in his car, a fan asks him to sign his Yeezy Red Octobers to which Kanye cracks a smile and agrees to autograph a pair of Air Yeezy sneakers for a fan — only to blast the fan by telling him his kicks are fake! While their are numerous stories going around Kim and Kanye will be getting married in Florence, Italy next week at the Palace of Versailles! The ceremony will be intimate and elaborate! Guests include Ryan Seacrest, Beyonce and Jay Z, Demi Lovato, Lindsey Lohan, Teyona Taylor and so many others!  Can’t wait to see the footage of this one! Until then, check out Kim and Kanye’s paparazzi/fan frenzy and Red October blast below!