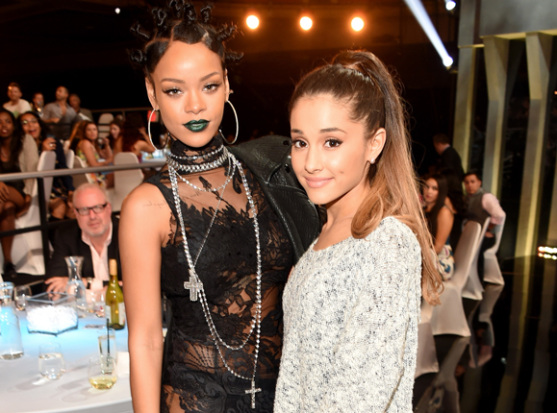 Last night’s iHeartRadio Awards was full of fun and surprises! Rihanna was the night’s leading lady winning the award for Artist of the Year, Song of The Year for “Stay”, Hip Hop/R&B Song of the Year for “Pour It Up” and Best Fan Army for the #RihannaArmy. Throughout the show the cameramen couldn’t help but notice the pop diva that dressed in goth assisted with a very interesting hairdo. Throughout the show, the cameras often cut to Rihanna to catch her reaction to the night’s events. During Ariana Grande’s performance of her new hit “Problem” the cameras cut to RiRi capturing her mocking Ari’s performance. It looks as if Rihanna found the 20-year olds awkward cutesy/sexy dance moves a joke! Although Rihanna may have thrown some major shade, her and Ariana got together to exchange some words and take pictures. It’s interesting because even though it looks as if Rihanna was laughing at Ariana’s performance, she could have been laughing at anything! What do you guys think? Check out the footage below!