I found myself very excited to share what “BennettKnows”, when my professor asked what was the big deal with Macklemore and Ryan Lewis at last night’s Grammy Awards in class! Today’s talk of the town is definitely how Macklemore & Ryan Lewis “robbed” Kendrick Lamar’s Grammys for Best Rap Song, Best Rap Artist and Best New Artist. While both artists are amazing, successfully delivering new, unique styles through their records, The Heist and Good Kid, m.A.A.d City respectively, a lot of people feel that Macklemore isn’t a “legit” rapper especially in comparison to the influential Kendrick Lamar. Although The Heist was extremely successful, hip-hop heads say it didn’t deserve the Grammy for Best Rap Album, especially compared to hip-hop’s most recent success’ Yeezus, Nothing Was The Same, Magna Carter Holy Grail and of course, Good Kid, m.A.A.d City. 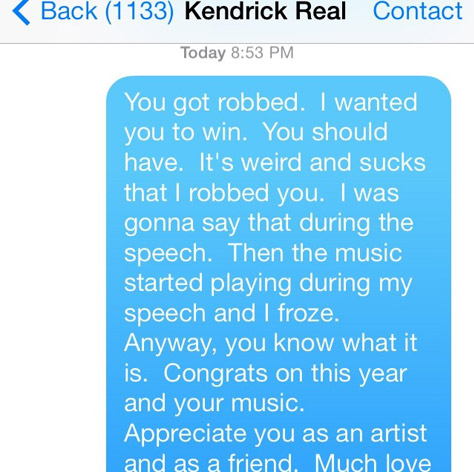 After the ceremony, Macklemore sent Kendrick a text message acknowledging the so-called “robbery” saying, “You got robbed. I wanted you to win. You should have. It’s weird and sucks that I robbed you. I was gonna say that during the speech. Then the music started playing during my speech and I froze. Anyway, you know what it is. Congrats on this year and your music. Appreciate you as an artist and as a friend. Much love”. He then shared the text message with his fans with the topic, “My text to Kendrick after the show. He deserved best rap album… I’m honored and completely blown away to win anything much less 4 Grammys. But in that category, he should have won IMO. And that’s taking nothing away from The Heist. Just giving GKMC it’s proper respect.. With that being said, thank you to the fans. You’re the reason we were on that stage tonight. And to play Same Love on that platform was a career highlight. The greatest honor of all. That’s what this is about. Progress and art. Thank you. #grammys”. It’s interesting to see Macklemore making a statement about the Grammy-snub. The National Academy of Recording Arts and Sciences hold the Grammys. The nomination process and voting is determined by pure quality of the music, not sales, not chart performance, friendship – just the music. Where did The Grammys go wrong? Did they go wrong? Sound off below!