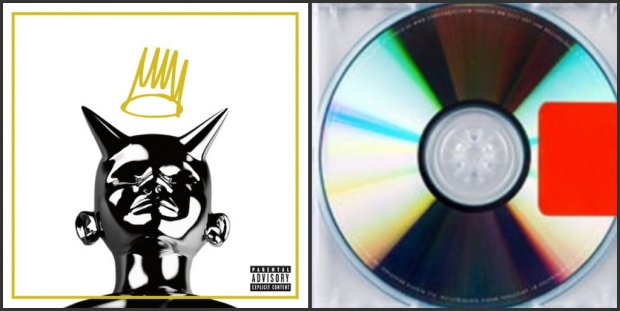 Fans long awaited not one, but two of Hip-Hop’s biggest artists album releases! Both J. Cole’s Born Sinner and Kanye West’s Yeezus released today! Both album’s are really good; both with their own unique styles and different vision’s, but let’s go over a few thing’s: Why would J. Cole release his album on the same day as superstar Kanye West? What are these album’s highs and lows? Which album is better?

Kanye West’s sixth-solo album, Yeezus, is a piece of art. When Rolling Stone announced that the album would have a dark theme with a side of many screams and beats, I became unsure about what Kanye was doing. Upon listening I realized that Kanye wasn’t trying to make a classic; he was working on a unique and creative masterpiece that introduces something that no other artist has done before. While lyrically, Yeezus isn’t the best, the flow and constantly changing beats are entertaining and just like 808 & Heartbreaks, the album is something that any Kanye fan would easily love.  My favorite tracks on the album include “Black Skinhead”, “Bound” and of course “New Slaves”. This album takes Kanye’s artistic image to new heights.

J. Cole’s sophomore album, Born Sinner, is definitely a classic and what I would call the Roc Nation artist’s breakthrough album. Lyrically, J. Cole kills it! Every track sounds great from the beats to the lyrics; I can definitely bang to this album, hands down! My favorite songs on the album are “Vlluminati” which sets the pace of the album’s “born sinner” theme, “Forbidden Fruit” and “Crooked Smile”. I think that Born Sinner redefines Cole, bringing him to new levels and soon, super-stardom, just as he wanted. The reason J. Cole released the album on the same day as Ye was probably for promotion, everyone loves a good-old album-sales battle, and inorder for J. Cole to be compared to artists such as Jay-Z and Kanye he needed to make a move like this. I believe that it was a very wise move that will positively impact the future of Cole’s career.

So which album is better? In my opinion, Born Sinner! Overall, Born Sinner is a classic and a much better listen! Yeezus is for fans; I really can’t see any of the album’s tracks taking over the radio. I believe that Yeezus is going to sell more copies, only because Kanye is an established rapper with a huge fan base, however Born Sinner is the album that is going to make an overall bigger impact! What do you guy’s think!? Do you disagree? Agree? Sound off in the comments below!