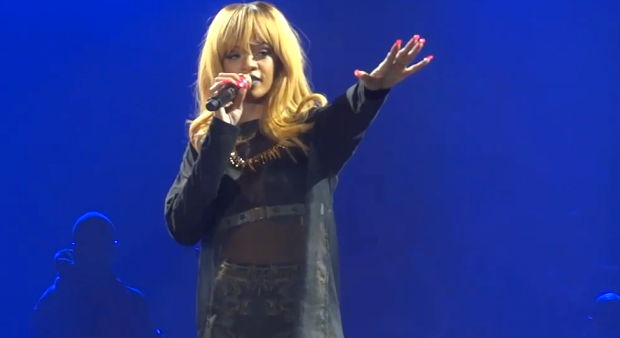 Rihanna is know for her bad attitude but you wouldn’t think a gift would be a problem . . . but it’s Rihanna, she doesn’t want your phuckin gifts. In a recent show, a fan threw a small gift on stage with the “Pour It Up” singer to which she quickly shot down. “Don’t throw any sh-t up here or I”m leaving”. She quickly covered up the harsh response with “I love your gifts just make sure they don’t knock my people out”. It’s actually kind of funny but imagine if you were the fan who threw the gift on stage. Rihanna is currently on her “Diamonds World Tour” in Europe with DJ David Guetta in promotion of new single, “Right Now”. According to reports, Rihanna is growing fatigue as she reaches the heart of the world tour. Last week, Riri was under media’s fire for showing up to a concert in Berlin 3 hours late and delivering a crappy performance. Although media has surely caught her bad side, it doesn’t look like Rihanna cares, enjoying her daily shows and constantly thanking her fans via Instagram. On the other hand, fans are highly anticipating Rihanna’s “Pour It Up” video, which should be here any day now! For now you can check out footage of Rihanna at her shows below!