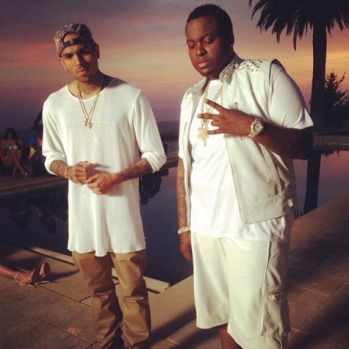 Last night, I listened to Sean Kingston’s track, “Beat It” ft. Chris Brown and Wiz Khalifa of his upcoming album, ‘Back 2 Life’ and I believe that the track is fire! Chris Brown’s vocals, along with Sean’s are used for the chorus, where they sings, “He ain’t fly! No! You don’t need to lie! That’s why you called my phone! You wanted me to beat – beat – beat it”. A video for the track was shot this weekend. Sean, Chris and Wiz shot a few scenes in a mansion, on the coast-line, using a real nice sunset for the backdrop. I hope the video serves the song justice. A video of the three in the studio for the song was released last week. While Wiz smokes a blunt while recording his rap for the track, Chris Brown can be seen dancing all around the studio! Sean Kingston’s upcoming album, ‘Back 2 Life’ is due later this year! Until then check out Sean, Chris and Wiz in the studio for “Beat It” below!