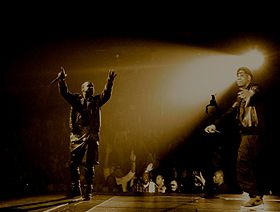 You are now watching the throne! Earlier this week producer, Mike Dean, announced a sequel to the amazing album, Watch the Throne, a compilation of Jay-Z and Kanye West. Watch the Throne brought hit singles N*ggas in Paris, H.A.M, Otis and Gotta Have It. Its no doubt that the two can make the sequel full of hits, just as the first album, but we’ll just have to wait. Until then, you can enjoy the new music video of Watch the Throne’s, seventh single,  No Church In The Wild. The video features protesters fighting the police and the Occupy Wall Street references are undeniable, check out the video at the link below!

No Church In The Wild